Smartphones have already entered the lives of most internet users, and more will follow. A recent survey of 170,000 internet users across 32 different markets estimates that 80% of online adults have a smartphone – a number that is expected to increase in the future1. As traditional desktop computers are increasingly replaced with tablet and mobile phones, business decision makers will increasingly opt for their smartphone for checking emails, social media, and taking part in market research surveys. In fact, this is already happening – mobile surveys are currently the methodology used by most market research agencies.2

The findings and recommendations in this white paper are based on industry expert interviews, desk research and an analysis of data collected by B2B International from 22,539 online survey respondents between 2014 and 2015.3

The rise of smartphones in market research

Survey-based market research has always evolved with the technology available to it, from paper-based or face-to-face research, through telephone research, and online surveys. While each new data collection method has not replaced previous methods, each new method has grown in popularity for the same two reasons: Firstly, it has increased the pool of potential respondents available, and therefore the reach of market research projects. Secondly, it has brought cost-savings.

The current rise of smartphone research is driven partially by these factors but mainly by changing respondent behaviour. This is simply happening when respondents receive their invitation to take part in a survey and choose to complete it while on their smartphones. Adapting to smartphones is therefore not a choice, but a necessity for market researchers, who are forced to choose between optimising surveys for smartphones or disallowing those devices from taking part. As will be discussed shortly, allowing online surveys to be taken on mobile devices without optimising them for that platform has serious implications on data quality.

Online survey invitations usually come through email, particularly for B2B, and when these are increasingly opened on a mobile phone, the likelihood of the survey being completed on that device also increases. The most disruptive potential therefore lies in smartphone research, also known as “mobile web” surveys4. These are online surveys optimised for mobile devices, and they are increasingly being used where online surveys were in the past.

Importantly, smartphone surveys are complementing, rather than replacing, older methods of data collection. Due to the longer time it takes to complete a survey on a mobile device, the smaller sample, and the higher rejection rates on panel data from smartphones, this method leaves a gap, which means that traditional approaches like telephone will stay have a role to play.

The growth in smartphone research is happening across the industry. Between 2013 and 2015, mobile research has grown at a very fast rate, with 67% of market researchers (agency- and client-side) using mobile surveys in 2015.5 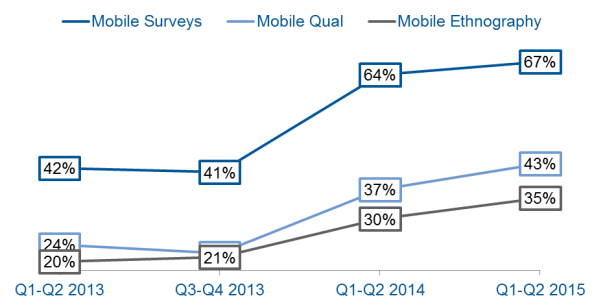 The trend is driven by developing markets. B2B International’s analysis of 22,539 online survey respondents found that, depending on the profile of respondents, B2C respondents are between 1.5 and 3 times more likely to use a smartphone than B2B respondents.

The markets with the highest levels of smartphone participation are in Asia except China. Malaysia, Indonesia and Singapore all have particularly high rates of mobile-based survey-taking. Closely followed are some Latin American markets, South Africa and Middle Eastern markets like the UAE. These markets usually see 15-30% smartphone participation for B2C and 5-10% for B2B. Markets like Brazil, Russia, Colombia and India are below this level with between 5-20% for B2C respondents and 4-10% for B2B. European markets in general, North America and Oceania all have the lowest participation levels between >1 – 10% for B2C and >1 – 3% for B2B. Most senior B2B decision makers own a smartphone that they use for business purposes (92%), including many who use that smartphone to research products or services to buy for their business (77%) and these are both increasing trends6. B2B marketers are already tuned into this, and have optimised websites and marketing for such devices. Market researcher need to adapt as well. Four points are important to consider when surveying B2B audiences on smartphones. As with previous waves of new data collection methodologies, smartphone surveys bring new opportunities and constraints for market researchers. If we wish to engage respondents on smartphones, there are some basic requirements that must be met. Firstly, responsive design is necessary. Responsive design in online surveys optimise them for use on a smaller screen like those on smartphones, and make the survey flow easier on that device – rather than merely showing a smaller version of a survey designed for a monitor. Other important factors to consider are: data roaming costs, timing of send-outs, shortness of questions, question layout, and use of media and verbatim questions.8

All these are factors that must be considered in order to optimise surveys for smartphones. As one report argues: “the industry shouldn’t make the same mistake with mobile research that it did with online research for the first 10 years, copying long pen-and-paper surveys into a new channel.”9 Real optimisation requires going beyond the minimum necessities like responsive design, and must appreciate that smartphone surveys are comparable to but different from online surveys.

How smartphones are changing research

When optimising surveys for mobile devices, market researchers can add a new channel without compromising the data quality. Responses on smartphones and computer are similar and comparable. B2B International’s analysis of recent survey data confirms this. For online surveys that are both taken on smartphones, tablets and computers, there is no significant difference in the amount of text in verbatim responses that are attributable to the data collection method itself.10 Furthermore, data such as scores collected in a survey is not affected to a significant degree when comparing surveys taken on smartphones and computers.11

An important difference, however, is the time taken to complete surveys: The longer the survey, the greater the difference. For a long online survey of about 30 minutes, it would usually take about 25% more time to complete on a smartphone. To fully optimise a survey for smartphones, it should therefore be shortened accordingly.

Smart phone research brings many exciting new opportunities for data collection. As older data collection methods generally see dwindling participation rates, this method offers a new mode of engagement. It is also possible to conduct research closer to real-time purchases and triggered surveys can be timed closer to the moment of truth, while passive research opportunities are also worth considering.12 Smartphone surveys also provide location data, and engage the respondent when they have a smartphone camera available.13 While smartphone surveys are often seen as merely a different channel of online surveys, they can complement rather than replace other data collection methods. Multi-mode opportunities whereby a respondent is sent a link or task to their smartphone during a telephone interviews, opens up new possibilities for engagement before, during or after the interview.14

The increasing use of smartphones in market research participation leaves both agencies and research buyers with a strategic choice. They can either embrace it, and optimise their data collection methods for these devices, or screen out such devices from taking part. Given the rapid rise of mobile research in the industry and increasing time spent on smartphones, it would be unwise to pick the latter option.

The shift towards smartphone research is different to previous new data collection methods in that it is driven by respondents themselves, rather than the data collectors. Most of the respondents driving the change are based in developing countries, are acting in a consumer capacity, are under 55 years of age, and are used to working on their smartphones.

To accommodate the demand for smartphone surveys, data collectors must adapt. The bare necessities of responsive design for surveys are not enough to fully utilise smartphone surveys – a wider appreciation of the differences of the channel is needed. The good news is that data collected on smartphones is remarkably similar and comparable to computer online survey data, if the survey is optimised correctly for both devices.

If data collectors adapt, they can also reap new benefits provided by this method such as the use of geographical data and engaging multi-mode methods of engagement. If they don’t adapt, they will likely find themselves having to at a later point in time.

Importantly, smartphones are affecting, but not replacing other methodologies. Surveys optimised for smartphones should be shorter than online surveys, have fewer opportunities for incorporating media like video, and will have a smaller sample pool for a while yet – particularly for B2B. Researchers needing depth and sample size will therefore either have to reduce the content in surveys or complement smartphone surveys with traditional methods. At B2B International, we believe the real value in smartphone research lies in striking this balance, and using multi-mode options that combine the best of both worlds.

3This analysis stemmed from anonymised data from a number of surveys conducted by B2B International between March 2014 and May 2015, across various markets, with 9,091 business-to-business (B2B) respondents and 13,448 consumers (B2C) respondents.

4The more basic type of mobile research is SMS/text-based surveys, and while these are on the rise, they only work for very short questionnaires (1-3 questions), and have less disruptive potential. Tim Snaith, Chief Research Officer at One Point Global

7Nevertheless, this should increase as older generations adapt to smart phones, and younger generations take the knowledge with them when they become B2B decision makers.

8More tips on mobile data collection can be found on the B2B International blog:
https://www.b2binternational.com/b2b-blog/2015/05/28/6-tips-for-mobile-data-collection-in-b2b-markets/

9Reineke Reitsma, VP at Forrester Research, cited in her report: The Opportunities And Challenges Of Mobile Research (2011)

10However, drop off rates are far higher for verbatim questions for smart phone respondents than telephone interviews, which is why such questions are best to have at the end of the survey. Tim Snaith, Chief Research Officer at One Point Global

11This is also confirmed by a comparative study of the subject by Burge, J., & Joubert, S (2013): Mobile research goes to the game: Is it the battle of the states or battle of the brands? Research Now & Luma Research

12Passive research has a respondent’s permission to monitor certain types of action and data collected from a mobile device, such as geological data, browsing, phone use etc.

14The complication of point-spend or multi-option questions conducted via telephone could be replaced with a quick task or question sent to the respondent during the interview, after which the telephone interview could be continued.

Learn how mobile research can help your business