The Growth of Non-Rival Goods

The recipe matters more than the ingredients

Take note! This is very important because it is relevant to you and the profits that you are trying to make. The business-to-business world is changing very fast. In fact, a change that began 30 years ago is going to gather speed over the next decade.

Most businesses buy products that are exclusively consumed by them. The chemicals they purchase, the factories they occupy, the materials they use, once they are purchased cannot be used by anyone else. When a company buys a machine tool, no one else can buy that machine tool while it is in use. Economists call these rival goods. Many services are also rival goods because if I am cleaning your windows, I can’t clean anyone else’s at the same time.

Now the thing to note here is that some goods and services you have to pay for and some are free. Some are expensive with a high margin and some are cheap or have no cost. Economists call these free products non-excludable goods. For example, a company that takes water from a river for free (or very little money) is using a rival non-excludable product. The water, once consumed cannot be used by anyone else.

Where does your product or service sit in this matrix? 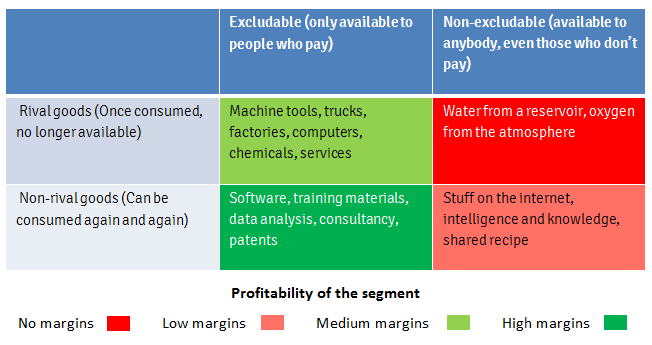 The big opportunity we see is in the growth of non-rival goods. These are products which once produced, can be consumed by many people. Microsoft, once it has developed software, can sell the same product to millions of people and in so doing will become very rich. The ability to produce non-rival products that are excludable (ie they can be charged for) has only occurred on any scale in the last few decades.

This is where Google and the internet come in. They provide an infinite (well almost infinite) source of data which everyone can consume again and again at no cost. The data are useful in their own right but made even more so by someone who can turn them into knowledge. Of course, this conversion usually requires someone’s time and therefore involves a charge. The stuff which is free on the internet becomes excludable non-rival goods in the hands of data analysts.

As Hal Varian, Chief Economist of Google said in a letter to the Financial Times last week “in a data driven economy, it is the recipe that matters more than the ingredients”. Mr Varian is right. The data driven economy is with us and companies that can create new recipes will generate the biggest change in the world economies. This is also the business of market researchers. They turn data into knowledge and hopefully go beyond this and turn them into action. The market for non-rival goods has grown enormously in the last few decades. It will be one of the fastest growing sectors of the economy in the future. Watch this space.