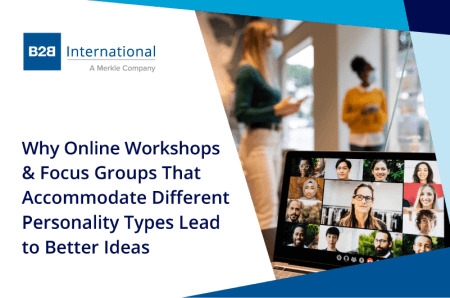 Perhaps the biggest shift businesses have had to make since the pandemic began is that of remote working. Discussions that used to take place face-to-face in offices and meeting rooms are now being conducted online through video calls whilst sat at home.

For the market research industry in particular, this shift has not only changed how internal meetings are run but also how they run discussions with clients and research respondents through workshops and focus groups.

While it’s easy to think that our ability as researchers to run and gather meaningful results from workshops and focus groups has suffered in the absence of face-to-face, the opposite may actually be true. The answer why lies in the fact that online workshops and online focus groups can be more accommodating of different personality types.

Extroverts are among those who have missed the face-to-face working and group interaction aspects of workshops and focus groups the most during the past couple of years. However, those who are naturally more introverted may have found it easier to participate and share ideas in group discussions from the comfort of their own homes, especially when using online collaboration tools such as interactive whiteboards.

Given that at least a third of people are on the introverted side, online workshops and focus groups that make use of interactive collaboration tools alongside traditional group discussions can empower both introverts and extroverts to generate more and better-quality ideas.

While this article has focused on the benefits of making online workshops and focus groups more accommodating to different personality types in terms of the number and quality of ideas generated, it is also possible to take these learnings and apply them to face-to-face sessions.

The environment – create a physical space in a quiet area away from the group where people can write down their thoughts and ideas.

The structure – Share a detailed agenda and give advance notice of what will be happening during the session. Allow for plenty of processing time during the session and introduce exercises before a break to allow people to think about their answers before group discussions begin.

The exercises – Allow time for participants to work alone as well as in groups and ensure everyone writes down their ideas.

Readers of this blog also viewed:

Learn more about our research programs >