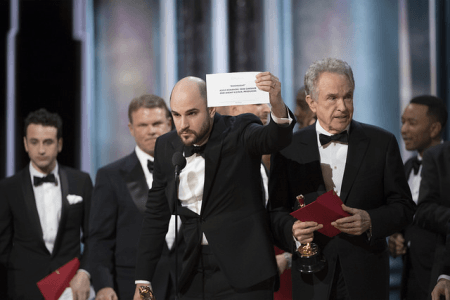 We awoke this morning to news about the screw up at the Oscars when they announced the winner as La La Land instead of Moonlight. Apparently someone had given Faye Dunaway and Warren Beatty the wrong envelope naming La La Land and not Moonlight. As they say, “shit happens”. They also say that “people who live in glass houses shouldn’t throw stones”. It would be hard for us to be critical knowing the mistakes that can happen in our industry.

Mistakes happen everywhere. What really matters is the avoidance of them in the first place and the correction of them should they happen. Here are some of the gaffes that we know about in the market research industry.

A market research company (not us, we hasten to add) was presenting the findings of a customer satisfaction survey to a global chemical company. Somehow, when the data was processed, the satisfaction scores were reversed so that they presented a picture that was the exact opposite of what should have been. These data showed the chemical company in a very poor light. During the presentation, the researchers rationalised the findings. The client seemed to agree. Everyone was convinced that the company’s service delivery, products and everything they did was rubbish. After the presentation was over, more analysis was required during which the mistake was recognised. It took some courage to admit to the mistake and then reverse all those arguments that seem so plausible during the presentation.

We can’t be smug. We were guilty of a mistake a couple of years ago which happened during a multi-country study involving an online survey sent to our client’s customers. Ten languages were covered in the survey. The team scripting the questionnaires mixed up the Korean and Chinese introductory letters and questionnaires and sent them to the wrong nations. Easily done if you don’t speak Korean and Chinese, but this was no excuse. It reflected badly on the sponsoring client company and of course on us as the research agency. We had to fall on our sword, apologise profusely to our client and the recipients of the questionnaire, and do so as quickly as possible.

Then there are the mistakes that take place in the phone unit where interviews take place. It is almost impossible in a large survey for every interview to run absolutely smoothly. Respondents may be irritated by the request to take part in a survey. Even the very best interviewers are capable of saying something that riles a respondent. Respondents may be annoyed by interviewers who have the wrong accent or are not a native of their region. When a respondent complains to a client company it creates considerable pain at the agency.

Data processing and interviewing are areas that have to be watched very carefully. In addition, a subject of great contention is the translation of questionnaires. However this is a long discussion and worthy of a separate blog.

Let’s finish with some thoughts on what to do if and when a mistake happens: