How to Cooperate Effectively 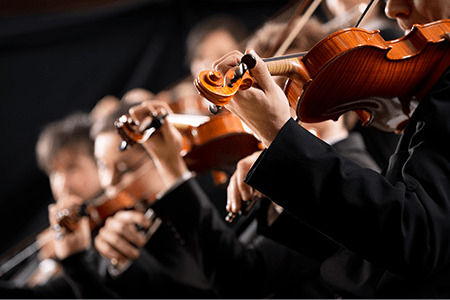 Maybe some of you have been to a concert during the holidays or around the turn of the year. In Germany, for example, it is very popular to play Beethoven‘s Symphony No. 9 on New Year‘s Day. While I was listening to a concert in the Cologne Philharmonic Hall on New Year’s Eve (they played a varied program from Boccerini to Piazzolla) I was again fascinated by the harmonious interaction of the orchestra. Each musician has to play his part perfectly and at the same time have eyes and ears open for the other musicians so that he can react, if necessary. There is no personal benefit to being outstanding or trying to realise his true self – if anything, the hearing pleasure of the audience would suffer from this.

While I was admiring the harmony and the perfection of the orchestra I started thinking about analogies between an orchestra and a company. Isn’t a good orchestra a prime example for efficient management and perfect cooperation?

Many more examples come to mind but even this short list demonstrates how similar the challenges of an orchestra and any team in a company are. Unfortunately, there is one big difference: the orchestra always performs well (one can argue about the style or the interpretation of a piece of music but nobody is leaving the concert saying: the violins were great tonight, but did you hear the terrible brass section – if this were the case, the whole concert wasn’t good).

Who can say such things about a commercial organisation? Does your team always perform well? We know this isn’t always the case: departments are not always coordinated well, there are silo’s and personal vanities, there are meetings in which one tries to outperform another one, and there are leaders who are convinced that they always do better and just take over the presentation in front of the client. I’ve never witnessed a conductor running to the woodwind section during the concert, snatching the instrument from the flutist and start playing the flute solo himself.

Could a leader in a commercial organisation learn from a conductor and his orchestra?

Let‘s have a look at the topic of conflicts and how they are managed. Because of a desire for harmony, conflicts are often banned. Naturally they are still there and are smouldering beneath the surface and then suddenly they come to light. Maybe it happens in a meeting and a colleague disavows another one in front of the manager, just because he doesn’t like him. The personal conflict has moved to the functional level – and here it is harmful for the performance of the team.

In an orchestra this is simply not possible. Should the bassoon upstage the oboe just because he is annoyed with them? No musician in the orchestra would ever consider leaving a joint performance just because of interpersonal animosity.

Musicians in an orchestra know that respect is more important than harmony. Not everyone has to like each other – but everyone has to be sure that he is taken seriously in rehearsals and on stage and that he will be able to fully perform without discrimination. Functional and personal levels are separated from each other and this is how it should be in a team.

Not long after the concert examples of efficient cooperation within an orchestra came to mind, I became aware that this is the key point for outstanding performance. Because it was New Year’s Eve and time for resolutions, I resolved to keep this in mind throughout the year and transfer the best practices from an orchestra into our team.

In order to successfully manage this I will – of course – be going to concerts often.