What Makes a Good Interviewer? 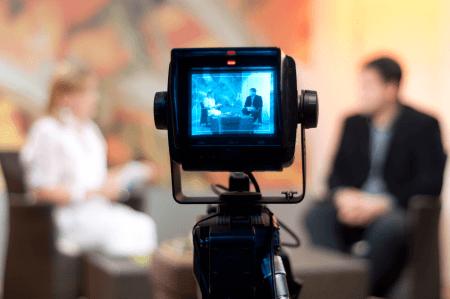 Chat shows are immensely popular. People in the US have got used to staying up late to watch David Letterman and now Stephen Colbert. In the UK they watch Graham Norton when the kids have gone to bed. What is it about chat shows that makes them fascinating?

Well, first off, we all love dirt, especially if it is skilfully dragged out by a great interviewer. We are looking for some revelation and often we get it. How is it done? What makes a good interviewer?

Obviously preparation helps. The chat show host must have done their research. Without this background knowledge on a guest, it’s going to be difficult to probe and follow-up their answers.

They must show interest in the subject. It is the host’s job to dig into the life of the guest to find out something that hasn’t been exposed before. It would be hard to imagine that someone would open up to a disinterested party.

And the chat show host must be trusted. This seems paradoxical in that the interview is being beamed to millions. However, a skilled host puts the guest at ease and for them it should feel like a one-to-one. The host helps the guest answer difficult questions by creeping up on them rather than hitting them up front with a sensitive subject.

All this is exactly how it works in a business to business interview. The interviewer needs to be well briefed on the subject. They need to show interest in it. And they need to create trust.

We believe that the voice plays a big part in developing trust, especially over the telephone. It is the only means by which two people communicate and the sound of the interviewer’s voice is their body language. A voice that is warm and easy, perhaps with a local accent, will communicate honesty and openness and in turn this will be reciprocated.

It doesn’t always work. Michael Parkinson, a master British chat show host, famously failed to get anything other than monosyllabic answers from Meg Ryan when he interviewed her in 2003. He found he was getting nowhere with the interview and in exasperation asked her what she would do in his place. She snapped, “I would wrap it up?”, and he did.

Oh, did we forget to mention? The other thing that makes a good interview is a good respondent. You can’t win them all.